In my last post, I did a simple All In One installation. Now we are moving to the next step and creating a multinode installation where I have the following three nodes.

The steps to put all this together are long, so I am splitting this post into part 1 where I put together the infrastructure and part 2 where we will install OpenStack on the nodes.

And then controlled by OpenStack – which is Open Source. So who knows, there could well be an opportunity for GNS3 to add VIRL routers to GNS3 topologies via OpenStack. But that will require lots of investigation! If you are running QEMU images in GNS3, they are run with the same fundamental KVM virtualization on which tools such as OpenStack and oVirt themselves are based –.

The following instructions are for installing a multinode OpenStack Icehouse on CentOS 6.6 in VirtualBox and GNS3. For CentOS, I started with the CentOS 6.6 Minimal DVD to keep the footprint small. I am also using GNS3 version 1.3.2.

I created three Microsoft Loopback interfaces on my host PC and created a bridge with 2 of the loopbacks and my PC’s NIC. I renamed the looback interfaces to Loopback1, Loopback2, and Loopback3. To have the nodes have access to your network/Internet, I created a Bridge on my PC and added my PCs Ethernet port and also included Loopback1 and Loopback2. For Loopback3, I am going to use that as my management access from my PC into the OpenStack management network. Using Windows, configure Loopback3 with IP address 192.168.0.100/24.

Once you have finished creating the VMs and installed CentOS, eth0 on each VM will be the servers public IP. Record them as you can SSH into to them to configure them

Using GNS3 and some GNS3 Ethernet switches, we will create the following topology.

I could have done all this with less switches, but I used separate switches for each segment to keep it more clear what was happening and also that GNS3 isn’t very good at drawing the link lines in a nice pattern. So here are the switches that will be used.

Add the switches to the GNS3 canvas. Next, configure each switch as follows.

In GNS3, import the three Virtual Box VMs. In the GNS3 preferences, under the VirtualBox VMs page, click on the New button and add each of the VMs that you created in VirtualBox. For each also configure the settings.
Controller:

Add the three OpenStack nodes to the GNS3 canvas.

Now using the GNS3 Link creation, create the links from the switches to the Ethernet ports on the nodes.

At this point, all the nodes, switches and links should all be created and should look something like the diagram above.

Now before we install OpenStack, we’ll need to get the VMs ready to install OpenStack. Start up all the VMs using GNS3(press the Play button) so all the interfaces get added and we have connectivity between the VMs.

On the controller, do the following.

Now we will do similar setup on Compute node 1. 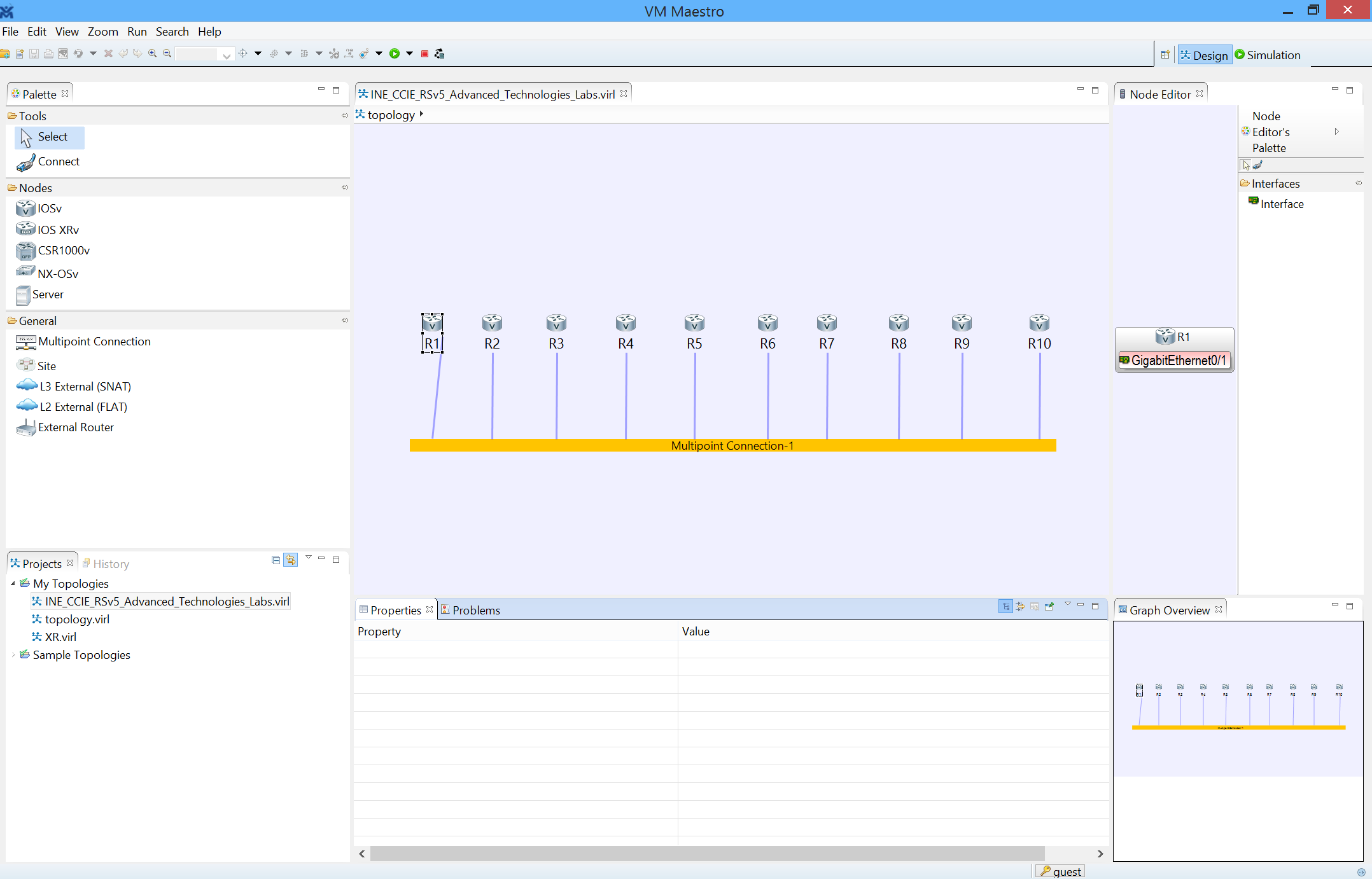 And finally we will do similar setup on Compute node 2.

Now, at this point, all the nodes are ready to have OpenStack installed. To make sure, you should be able to ping each node using its management IP address using both the IP address and the host names.

That’s it for this post. In part 2 of the post we’ll install OpenStack on all the nodes.

This post ‘Multinode OpenStack with CentOS in Virtual Box with GNS3 Part 1’ first appeared on https://techandtrains.com/.

I’m back with another “how to” article on Open vSwitch (OVS), this time taking a look at using GRE (Generic Routing Encapsulation) tunnels with OVS. OVS can use GRE tunnels between hosts as a way of encapsulating traffic and creating an overlay network. OpenStack Quantum can (and does) leverage this functionality, in fact, to help separate different “tenant networks” from one another. In this write-up, I’ll walk you through the process of configuring OVS to build a GRE tunnel to build an overlay network between two hypervisors running KVM.

Naturally, any sort of “how to” such as this always builds upon the work of others. In particular, I found a couple of Brent Salisbury’s articles (here and here) especially useful.

This process has 3 basic steps:

These steps assume that you’ve already installed OVS on your Linux distribution of choice. I haven’t explicitly done a write-up on this, but there are numerous posts from a variety of authors (in this regard, Google is your friend).

We’ll start with an overview of the topology, then we’ll jump into the specific configuration steps.

The graphic below shows the basic topology of what we have going on here:

We have two hypervisors (CentOS 6.3 and KVM, in my case), both running OVS (an older version, version 1.7.1). Each hypervisor has one OVS bridge that has at least one physical interface associated with the bridge (shown as br0 connected to eth0 in the diagram). As part of this process, you’ll create the other internal interfaces (the tep and gre interfaces, as well as the second, isolated bridge to which VMs will connect. You’ll then create a GRE tunnel between the hypervisors and test VM-to-VM connectivity.

The first step is to create the isolated OVS bridge to which the VMs will connect. I call this an “isolated bridge” because the bridge has no physical interfaces attached. (Side note: this idea of an isolated bridge is fairly common in OpenStack and NVP environments, where it’s usually called the integration bridge. The concept is the same.)

The command is very simple, actually:

Yes, that’s it. Feel free to substitute a different name for br2 in the command above, if you like, but just make note of the name as you’ll need it later.

To make things easier for myself, once I’d created the isolated bridge I then created a libvirt network for it so that it was dead-easy to attach VMs to this new isolated bridge.

To create the GRE tunnel endpoint, I’m going to use the same technique I described in my post on running host management traffic through OVS. Specifically, we’ll create an internal interface and assign it an IP address.

To create the internal interface, use this command:

In your environment, you’ll substitute br2 with the name of the isolated bridge you created earlier. You could also use a different name than tep0. Since this name is essentially for human consumption only, use what makes sense to you. Since this is a tunnel endpoint, tep0 made sense to me.

Once the internal interface is established, assign it with an IP address using ifconfig or ip, whichever you prefer. I’m still getting used to using ip (more on that in a future post, most likely), so I tend to use ifconfig, like this:

Obviously, you’ll want to use an IP addressing scheme that makes sense for your environment. One important note: don’t use the same subnet as you’ve assigned to other interfaces on the hypervisor, or else you can’t control that the GRE tunnel will originate (or terminate) on the interface you specify. This is because the Linux routing table on the hypervisor will control how the traffic is routed. (You could use source routing, a topic I plan to discuss in a future post, but that’s beyond the scope of this article.)

Repeat this process on the other hypervisor, and be sure to make note of the IP addresses assigned to the GRE tunnel endpoint on each hypervisor; you’ll need those addresses shortly. Once you’ve established the GRE tunnel endpoint on each hypervisor, test connectivity between the endpoints using ping or a similar tool. If connectivity is good, you’re clear to proceed; if not, you’ll need to resolve that before moving on.

By this point, you’ve created the isolated bridge, established the GRE tunnel endpoints, and tested connectivity between those endpoints. You’re now ready to establish the GRE tunnel.

Use this command to add a GRE interface to the isolated bridge on each hypervisor:

Substitute the name of the isolated bridge you created earlier here for br2 and feel free to use something other than gre0 for the interface name. I think using gre as the base name for the GRE interfaces makes sense, but run with what makes sense to you.

Once you repeat this command on both hypervisors, the GRE tunnel should be up and running. (Troubleshooting the GRE tunnel is one area where my knowledge is weak; anyone have any suggestions or commands that we can use here?)

As part of this process, I spun up an Ubuntu 12.04 server image on each hypervisor (using virt-install as I outlined here), attached each VM to the isolated bridge created earlier on that hypervisor, and assigned each VM an IP address from an entirely different subnet than the physical network was using (in this case, 10.10.10.x).

Here’s the output of the route -n command on the Ubuntu guest, to show that it has no knowledge of the “external” IP subnet—it knows only about its own interfaces:

Similarly, here’s the output of the route -n command on the CentOS host, showing that it has no knowledge of the guest’s IP subnet:

(Although it’s not shown here, connectivity from VM2 to VM1 was obviously successful as well.)

In this particular context, it’s a bit of a science experiment. However, if you take a step back and begin to look at the bigger picture, then (hopefully) something starts to emerge:

Anyway, I hope this is helpful to someone. As always, I welcome feedback and suggestions for improvement, so feel free to speak up in the comments below. Vendor disclosures, where appropriate, are greatly appreciated. Thanks!