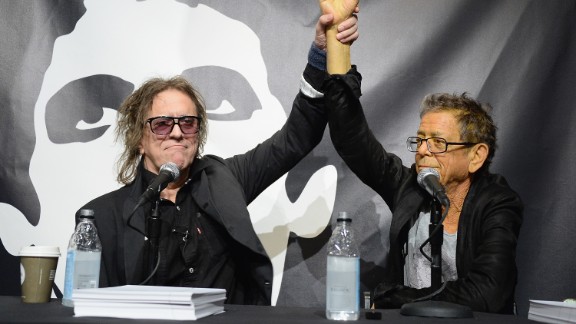 Rock n Roll Animal is a live album by Lou Reed, released in 1974. In its original form, it features five songs, four of which are Velvet Underground songs. They are all re-arranged into what will later be called a powerful glam rock set.

Steve used a 59 TV Special through a Hiwatt head and an MXR Phase 100.

He no longer has the guitar.

Lou Reed You can take Lou Reed out of New York, but there’s no taking New York out of Lou! The man started off as part of the Andy Warhol endorsed Velvet Underground in the late sixties, then moved on to a very diverse solo career including the sublime Bowie-produced Transformer and less successful albums of guitar larsens. Lou personally chose the songs and their presentation, with just simple chords and lyrics for most, but also guitar tab for others. It doesn't get much better than this, and I own many songbooks from Rock-n-Roll Hall of Famers and legendary artists such as Lou Reed and Velvet Underground.

Review By Rolling Stone At The Time:

Paul Nelson of Rolling Stone magazine was in attendance that night and recalls: 'As it happens, I had seen Reed and a mediocre pickup band at Lincoln Center some months earlier in his first New York non-Velvets appearance and he was tragic in every sense of the word. So, at the Academy, I didn't expect much and when his new band came out and began to play spectacular, even majestic, rock & roll, management's strategy for the evening became clear: Elevate the erratic and unstable punkiness of the centerpiece into punchy, swaggering grandeur by using the best arrangements, sound and musicians that money could buy; the trimmings, particularly guitarists Dick Wagner and Steve Hunter, were awesome enough so that if Reed were merely competent, the concert would be a success.

​Interview With Gibson Guitars: The Intro was your composition?

That’s right. It’s sort of a long, weird, convoluted story. I actually started writing that piece when I was in Mitch Ryder’s band, in Detroit. I wrote a couple of bits of it, and then put it on the back burner, and then kept returning to it every once in a while. My intention was to write a whole song. It became an intro because Lou’s manager came to us while we were rehearsing the tour, and asked if we could play something would serve as an opening for Lou to come on-stage. We messed around with a few things, and finally I said, “You know, I’ve got this piece I’ve been working on. Maybe we can make something happen with it.” I showed it to the band, we all started playing on it, and it just sounded great. While we were touring in Europe, the intro actually opened “Vicious.” It was only when we got to America that Lou wanted to open with “Sweet Jane.” It just so happens that both songs are in similar keys. “Vicious” is in E Minor and “Sweet Jane” is in E Major, so the intro worked without having to change anything. We just adapted it for “Sweet Jane.” I had written the framework and the opening lines, and from there we improvised our parts. We played it differently every night. Some nights it was better than others, but it was always a lot of fun to play.

(Easy Guitar). Here are 36 songs selected by Lou Reed's fan club in an unplugged, pared-down presentation with just the guitar chords and lyrics. Some of these songs are also shown in Play-It-Like-It-Is guitar tab, approved by Reed himself! Includes: Berlin * Coney Island Baby * Ecstasy * Goodnight Ladies * Guardian Angel * Heroin * NYC Man * Pale Blue Eyes * Ride Sally Ride * Rock and Roll * Sweet Jane * Walk on the Wild Side * Who Am I? * and more, plus an intro written by Reed and lots of rare photos.