Richard Wagner's 'Der Ring des Nibelungen', otherwise known as The Ring cycle, is the peak of operatic indulgence, excess and excellence. But how do you go about it? What should you listen out for? And what on Earth are they all singing about anyway? Find out with our handy guide.

The Ring - it's immense. Long, dense, mythological and, to top it all off, in German. The worst thing you could do, though, is be intimidated by it. Just because Richard Wagner's masterpiece and calling card is a mammoth work (or series of works) doesn't mean you should treat it any differently from other operas. The best thing to do is take it slowly, grab a translation and prepare to get lost in some of the most intoxicatingly sublime Romantic music ever composed, like this… 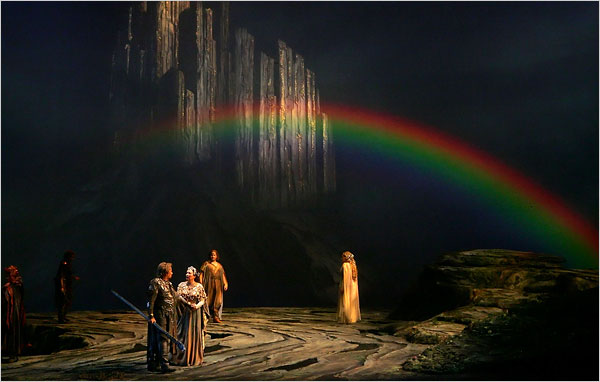 But first, a little bit of background info. Der Ring des Nibelungen (usually known simply as The Ring cycle) is essentially four very big operas, all linked together by the same story. In order, they are: Das Rheingold, Die Walküre, Siegfried and Götterdämmerung. There's no real way of paraphrasing that story without missing most of it out but to put in simple terms it's a bit like this…

Wagner's Ring presents the ultimate challenge for any opera company, and the New York Metropolitan Opera's new production of Der Ring des Nibelungen, unveile. The Ring Cycle was finally performed in its entirely—all 18 hours—in 1876. Wagner completed his last opera, Parsifal, in January 1882, and it was performed at the Bayreuth Festival that same.

A magic ring is stolen from the dwarf, Alberich, by Wotan, King of the Gods. However, he ends up having it taken from him by two giants - most of the story is about Wotan trying to get it back.
Then there's a whole other section about Wotan's grandson, Siegfried, who ends up getting the ring back, and Brünnhilde, Siegfried's lover, who also turns out to be Wotan's daughter (are you keeping up?). But these are just the main points - it's actually much easier than you'd think to keep up with the story, as long as you've got a translation handy or if you're watching a subtitled version.

And the Sydney Symphony Orchestra have also put together this easy-to-follow(ish) video:

Wagner took around 26 years to complete the whole thing, and it's easy to see why. There are all sorts of little interesting corners, quirky sub-plots, massive staging considerations and, above all, the incredible music. Wagner's idea was that it should be a 'Gesamtkunstwerk' ('Complete Artwork'), a complete synthesis of music and drama where you didn't focus on one or the other - they just co-exist.
But how did he do it? Well, here are some tricks he used:
What's a leitmotif?
Many of the characters, places and ideas in The Ring Cycle have their very own signature tune, or Leitmotif. Rather than an excuse to eat up composing time, the Leitmotifs act as a reminder about those characters, and Wagner occasionally changes them slightly to change how you feel about who it's representing.
So for Siegfried, the hero, we have this rather nice Leitmotif:

But for the two giants who take the ring from Wotan, Fafner and Fasolt, there's a rather more lumbering, threatening Leitmotif:

And here's one for a storm, summoned by Donner, the God of Thunder. Obviously.

There are dozens more to explore besides these two, and it's great fun to get to know them so you can anticipate a character's appearance in the drama. It's all designed to involve the listener even more and without them even realising.
Extra instruments
Unsurprisingly, a convincing performance of The Ring cycle needs some pretty serious orchestral clout. That means a lot of extra instruments. So, alongside the usual orchestral instruments, you'll hear tam-tams, Wagner tubas, anvils (18 of them), steerhorns and all sorts of extra on-stage instruments too.
Here's a fantastic anvil-eye view of the offstage anvils during Die Walküre from the Manchester International Festival:

Isn't it all a bit complicated?

We can't deny that The Ring cycle is a challenge for any listener, but that doesn't mean you shouldn't give it a go. As with so many things in opera, you get out what you put in - if you make the effort, then it's a joy to experience. If you're lucky enough to watch it live (it's often performed over four consecutive nights) then you're in for a real treat - incredible sets, wonderful music, bonkers storylines… and all for just one little bit of jewellery.

Oh, and there's this war-film-inspiring gem at the beginning Die Walküre as well:

Wagner's 'Ring' Cycle, otherwise known as Der Ring des Nibelungen (The Ring of the Nibelung), is actually a collection of four epic operas by German composer Richard Wagner, composed between 1848 and 1874.

Wagner was not a composer to do things by halves. His operatic 'trilogy' actually consists of four operas: Das Rheingold, Die Walküre, Siegfried and Götterdämmerung.
The first, Das Rheingold, was merely a prelude (despite lasting a hefty two hours), and Die Walküre, Siegfried and Götterdämmerung were subtitled as First Day, Second Day and Third Day, forming a trilogy.
These operatic greats, although now often performed separately, were originally intended to be performed in a series. A performance of Götterdämmerung alone lasts around five hours, so performances of all four are often staged over four nights - lasting an impressive 15 hours in total.
It's not only the timeframe that is impressive in these gargantuan operas. The music is rich and impressive, scored for a larger-than-life orchestra. Wagner even had a purpose-built theatre constructed for his performances. While composers in Europe often revelled in light, comic opera, Wagner decided never again to write an 'opera', and labelled his pieces as 'dramas' instead. He certainly proves the music to be worthy of that title using complex Greek tragedy-inspired plots, complete with gods, heroes, mythical creatures and a magic ring, which grants the user world domination.